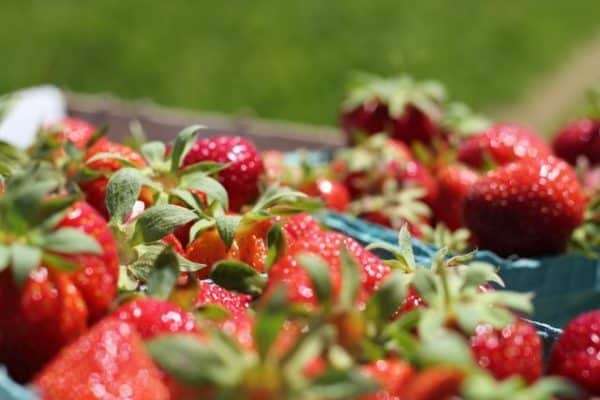 I met an Old Coyote last summer. He was taller than I had expected, broader in the chest, and gentler. None of the usual tricks at first glance. Perhaps he was feeling the need to be polite in new company. But like all Coyotes, at least the ones I’ve come across so far, he had a story to tell and it went something like this…

So this Filipino man comes over from across the sea, and the voyage was difficult, but he made it to the island somehow. And on that island was a native woman who’d had a vision of a field filled with row upon row upon row of strawberries and raspberries. And in her vision, there was a man who planted all those rows and she didn’t know what the vision meant – afterall her people planted according to the way the land moved, and those rows looked very straight. And after awhile, the vision came true, and on that island there came up row upon row of strawberries and raspberries, more than any had seen before, all planted by this one man from across the sea. And one night, they say, the man met the woman, maybe under the stars, maybe near the creek, maybe near the sea, but how ever it happened, not soon after, there came the first Indopino.

Now this first indopino had part of himself that went this way and part that went that way, and for awhile there was no trouble – that is, until he went to school, and the two parts began to fight, to struggle, and he couldn’t understand if he was to go that way or this way. And the going was hard for this First One. But like his father who had survived the passage across the sea and his mother who saw visions, this First One was determined, never gave in, never gave up, and after awhile became himself, both Indian and Pinoy. And a new people were made, a new way of looking at things, a new medicine. A new strength came into the world.

All that, just from one man from across the sea, and one woman who saw straight rows of strawberries, getting together (with that old rack of Rainier).

The Junior Elders told a slightly different version later on… seems that just before WW2, Filipino men came to the Seattle area looking for work. Some came for school, but it was tough times for most since many arrived during the worst of the Depression, so many found odd jobs at the local canneries or up in Alaska on fishing boats or working as domestics in town.

Soon after Pearl Harbor when Japanese Americans were sent to internment camps, the local farmers asked their Filipino workers to take care of their farms, which they did gladly. During WW2, the demand for berries increased to the point that the Filipinos were hard pressed to keep the fields tended and picked, so they put a call out for anyone available to help. Many Native American’s responded from as far away as BC, Salish tribes mostly, such as the Nooksack. Men and women both. In 1942 there were 12 recorded marriages between Filipino men and native women.

When the farmers returned from the internment camps, they gave parcels of land to the Filipinos in thanks. Some Filipinos and their families stayed on as farmers and harvesters, while others went to work at the Bremerton shipyards. Some indipinoy children are registered as tribally affiliated, but a few of the women I talked to mentioned that they never registered. Growing up indopinoy was difficult, especially during grade school since they were usually rejected by whites, pinoys, and natives alike.

The picture is far from complete, but I hope to fill in the gaps over time. There are three books on local Filipino history I need to find interlibrary:

They Cast a Long Shadow by Brian Roberts

“You got to move like hell” : trans-Pacific colonialism and Filipina/o Seattle, 1919-1941″ by Dorothy B. Fujita-Rony

Two others I need to purchase since they’re likely still in print: